Over the summer Solstice weekend I was wondering what the ancient Greeks did to celebrate? The Greeks were not as specific in their celebrations of solstice as the Celts, per se, because the sun nearly always shines in Greece. However, there was solstice celebrations centred on Apollo Helios– the sun god, specifically during the Athenian Hekatombaiôn, which were essentially in combination with New Year celebrations. However, these were not any more or less important than the other mysteries centred on other gods, which was a very Hellenistic way to interpret the importance of the gods in each individual life. 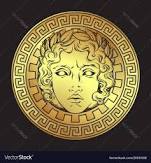 So then I thought of which gods were more or less worshiped on Evia? 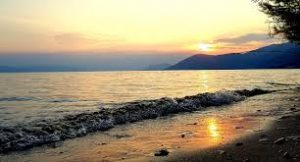 Evia is a beautiful, undiscovered gem of an island – the second largest in the Aegean Sea. The island is well known for those in the know, especially for its beaches, thermal springs and picturesque mountains covered with coniferous trees. Here is an island where you can easily slow down the pace of life andsignificantly improve one’s state of health, given time and an open mind. Actually, the holistic and healthy environment of the island, is one of the main reasons we chose to set two of our inaugural retreats here – who could refuse to spend some time in a land where everything is meant to heal both body and soul?

One of the most famous places in Evia since antiquity is the Euripus Strait– we will in fact be crossing here via bridge at Chalcis. Its uniqueness lies in the fact that its water currents change direction every few hours. Aristotle himself tried to solve the riddle, but still there is no complete answer to the question of what is the reason behind the phenomenon? There are theories, and what is known, is that the strait is subject to strong tidal currents, which reverse direction approximately four times a day. Tidal flows are very weak in the Eastern Mediterranean, but the strait is a remarkable exception. Water flow peaks at about 12 kilometres per hour, either northwards or southwards, and lesser vessels are often incapable of sailing against it. When nearing flow reversal, sailing is even more precarious because of the vortex formation. Myths were central to this phenomenon, such as the genus of the saying “stuck between a rock and a hard place,” first mentioned in Homer’s Iliad.

The island has plenty of other places of interest —ancient temples, theatres, Byzantine churches, Ottoman mosques and old stone fountains. There are many gorgeous natural areas across Evia, but we will concentrate on the south. We will plan excursions to the dragon houses at Draga, where there are some 20 large, ruined dwellings that were built with massive stone blocks without mortar and large stone slabs for the roofs, that local legend says were built by dragons. The Dragon House on Mount Ochi, north of Karystos is the most famous and well preserved and well worth a visit.

Another excursion will be planned to the Dimosari Gorge: A beautiful and well-maintained 10km trail that begins in Petrokanalo village, descending through Lenosei village to the sea. Much of this stunning trek follows a cobbled path, splashing through shady creeks, ponds, giant ferns and forest before ending at the sand-and-pebble beach of Kallianos. 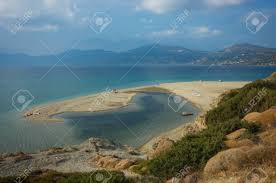 Set in a wide, half-moon bay under Mount Ochi, Karystos– like any Greek town worth its salt – has a mythological founder, in this case the wise centaur Chiron, the tutour of Achilles. It also features on the list of cities that contributed ships to the Trojan War.

Karystos is now very peaceful and laid back, the kind of place where fishermen sit chatting under the mulberries as they mend their nets. You can see all its landmarks within an hour – a handful of Neoclassical mansions and the Bourtzi, a seaside fort built by the Crusaders re-using bits of a Roman mausoleum. 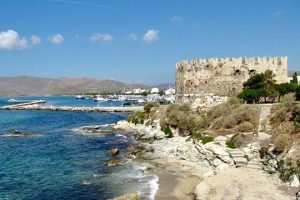 At the southernmost tip of Evia, Karystos is the start point of our dream trek. The village leads to a small mountain, sprinkled with ancient and medieval monuments, and onto a bucolic, nightingale-haunted gorge we will walk through, down to the sea. So we can do as the Athenians do on a weekend getaway – pack our rucksack, hiking boots, sleeping bag – or just sheets and a pillowcase and go.

On our first afternoon, we could go for a swim? Choosing between the sandy beaches that go on forever to the west of Karystos, or the more intimate sea coves to the east. We could do some yoga too. Then we could head 2km north to the village of Kaliviato visit its 12th-century Byzantine church and the spanking new Environmental Station, featuring exhibits on southern Evia’s natural history and its mysterious drakospita (dragon houses). 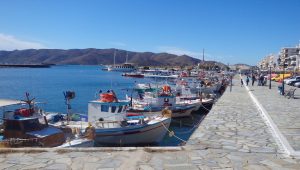 As the sun goes down, Karystos buzzes into life as its old-fashioned shops reopen after the long afternoon siesta – the same rhythm we find all over Greece in summer. We can join the locals on a traditional pre-dinner volta (stroll) along the waterfront, stopping for an ouzo or the local speciality, tsipouro (without ouzo’s aniseed) and plate of mezedes – perhaps a tentacle or two of the octopi seen drying on clothes lines, served grilled. Greeks dine late, but as we have a mountain to climb tomorrow, we might plan for an earlier dinner than the locals, who usually eat vers 9/10pm during summertime. We can indulge in seafood, fresh from the pure waters, as well as the tasty free-range meats – especially lamb and kid – from the mountains. Greek cuisine, like most in the Mediterranean, is always awash with vegetarian options from local gardens and organic farms. 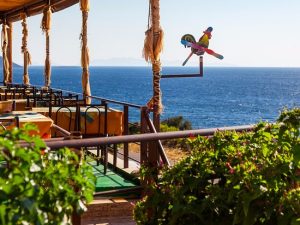 Next day, we get up early, purchase whatever supplies we need – but because of the plethora of natural springs, you’ll only need one big water bottle to refill. The lower slopes of Mount Ochi are dotted with villages, Byzantine chapels and old stone bridges linked by kalderimi (cobbled mule paths), first traced out in ancient times and still used regularly by locals. If we have time to meander, we will, otherwise we’ll go straight up to Myli – a charming village of watermills in a verdant ravine. 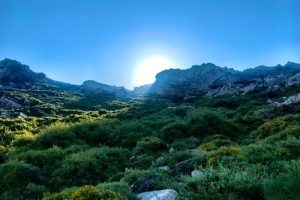 We can take the path from the central church, towards the 13th-century Cassel Rosso (Red Castle), named after the red tint of its wind-chewed walls. The castle was built by the Franks and Venetians and later inhabited by the Ottomans. Today the only intact building is an Orthodox church. Below, arches of a Roman aqueduct leapfrog towards Karystos. 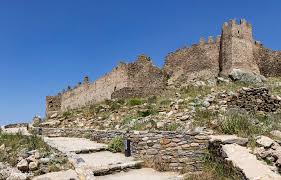 Back at Myli, we can have a drink at a coffee house under the plane trees, and then pick up the path towards the refuge. In ancient times, Karystos exported Mount Ochi’s greenish-white cipolin marble as far as Rome, Egypt and Palestine. After approximately 3 hrs’ walking, we’ll reach an ancient quarry the locals call Kylindri (Cylinders) because of its massive, 15m-long Roman columns; some are partially hewn from the rock, while others look ready for shipping. Legend says that when the marble workers heard about the fall of Rome, they downed their tools and simply walked away. 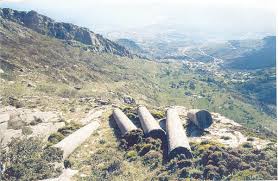 After another 90 minutes or so, we’ll come to the forest road and a simple refuge. The Kastanalogos, the mountain’s primordial chestnut forest, lies just below; some trees have trunks even wider than the Roman columns. 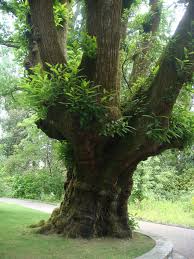 From the refuge, it’s about another hour to the summit of Mount Ochi, where there’s a church dedicated to the Prophet Elijah, and a fascinating drakospita. Dragon houses are unique to south Evia and this one is the best preserved – a rectangular room made of long, perfectly cut stones, roofed with enormous plaques that have partially collapsed. They are so remarkable the locals once thought dragons built them for their lairs; archaeologists date them from the 8th century BC. This one may have been a shrine to Hera– who famously made love to Zeus, and the Olympian then married her on this mountain.

The following morning it’s a two-hour walk to the top of the enchanting Dimosari Gorge, where chestnut trees and giant ferns offer cool shade in the midday sun. Its 10km kalderimi was once the main highway for the remote, semi-abandoned villages of the gorge and the north coast. Alongside the path the river splashes, occasionally into beautiful waterfalls with rock pools – perfect if you need a quick dip. Goat bells tinkle in the distance. Bonelli’s eagles and peregrine falcons circle above. If you know where to look, you can find rare indigenous rock plants, orchids and wild peonies.

Alongside other excursions to the Purple Caves nearby our home base of Zarakes, and our local beach of Firniakos; other optional excursions to the Blue Lagoon and the beautiful beach of Almiropotamos, will also be planned. Our goal is to blend our holistic yoga journey into one with the Hellenistic gods, so that we may come out more complete.