Armata is an annual celebration around September 8th on Spetses, which commemorates the battle of Greek Independence during 1821. Local artisans build a boat in the Old Harbour in the weeks leading up to the festival. It is later used as an effigy on the final Saturday evening of the festival, when many yachts anchor in the local harbour and smaller boats sail out closer to witness the re-enactment of the battle followed by a spectacular fireworks display. 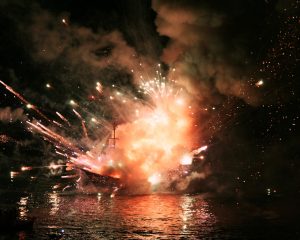 The 10-day festival is spectacular and includes many activities such as theatre, dance, concerts and art shows. Be sure to book your accommodations and boat tickets early as this festival is hugely popular.